Kansas City and New York, two of my favorite places and now more connected for Haute Market than ever. It’s been a long time coming but my great friend, Sarah, is finally able to join me in launching something new and fabulous for you…next week!

Last night Sarah covered her first event on behalf of our new online magazine name. We just can’t get enough of Jack Mackenroth. Tim Gunn is another of my fashion-fave people. So imagine how jealous I was last night when Sarah was there with BOTH of them! 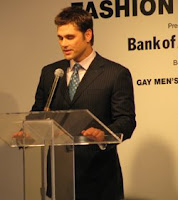 Jack Mackenroth just launched a project called Living Positive by Design (http://www.livingpositivebydesign.com/). It’s directed at HIV+ peeps with the goal of fighting the stigma of HIV with visibility and helping people feel less shameful. Last night Jack spoke at the Gay Men’s Health Crisis event, hosted by Tim Gunn. (The event included an auction. Sarah had her eye on a D&G coat that had a starting bid of $18K – youch!)

Sarah had an opportunity to speak with Jack, so we’ll have more about that with our new site launch next week.

Jack sent me some of the fabulous red scarves he’s designed to further promote “Living Positive by Design”. Stay tuned to find out how you can score Jack’s scarf!

Jack has sent me several of his red scarves specially designed, by him, to bring awareness for his cause. Watch for future chances to win a few scarf for yourself!